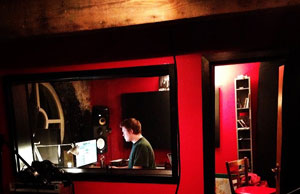 For the last decade or so, I have worked as a recording engineer and music producer. During that time I have been fortunate enough to work with a number of incredibly talented artists. From assisting on sessions for Peter Gabriel, Tom Jones and Kanye West and recording and mixing for The Fall, to producing local artists such as Fruitless Forest and Suburban Symphony, it’s been a truly amazing experience. After I graduated from the Tonmeister programme at the University of Surrey I went on to work at Real World Studios in Bath, before setting up Hilltown Studios in Colne, Lancashire.

Recently however, I have felt in need of a new challenge.  I have been fairly obsessed with video games ever since my parents bought me a Sega Master System as a child. The idea of exploring virtual worlds and controlling the events unfolding on my TV screen utterly captivated me, and as technology has advanced the medium of interactive games has become steadily more immersive and complex. The mainstream adoption of VR technology fascinates me, and seems to be leading us closer to completely immersive experiences that up until now existed only in science fiction. The role of audio in games has always been extremely important to me. When I think back on my most memorable gaming experiences, they are always tied to sound in one way or another. The warp sound from Myst, the sound of the chainsaw from Doom, the alert fanfare from Metal Gear Solid and the infamous “You Died” sound from Dark Souls are etched deep into my subconscious. The soundtrack to Riven still fills me with a sense of awe, and Aeris’ theme from Final Fantasy 7 still makes me want to cry like a baby. I realised I wanted to learn how to create and implement sounds like these.

I got my chance to be a part of this process when I was asked to compose the soundtrack for a game called Beyond Flesh and Blood, a third person shooter in which the player rampages around a post-apocalyptic vision of Manchester killing hordes of rebel forces in a remote controlled mech. The developer Pixel Bomb Games initially only contracted me to write and produce the music for the game, but towards the end of the game’s development they also asked me to implement the sound effects and music within Unreal Engine. Relishing a challenge I accepted, although at the time I had no idea how the engine worked. After consuming all available online resources within the space of a couple weeks I was (almost) ready. I quickly set about adding reverberant volumes to create a palpable sense of space, randomising and revising existing sounds to make them more appropriate, adding attenuation to create depth, and recording additional alien slime noises with the help of a bucket full of chicken soup and a sink plunger. It was a steep learning curve, but a lot of fun at the same time. The combination of creativity and overt technological geekery was the reason I got into sound engineering in the first place, and the experience I had working on Beyond Flesh and Blood satisfied both of those cravings in a way I hadn’t yet experienced. It dawned on me that this was something I could specialise in and make a career out of, and have a damn good time doing it too.

And so today I began my studies on the MSc – Sound and Music for Interactive Games (or SMINT, as it appears to be affectionately known – other brands of breath freshener are available). It is my hope that the things I learn and the people I meet over the course of the next year will allow me to pursue a career in video game sound design. Ideally I would like to specialise in sound design whilst keeping my compositional abilities sharp enough to be useful if the opportunity arises. One area I am particularly interested in is the use of HRTFs and head tracking to create true three dimensional audio for VR experiences. Sound does so much to give us a sense of place in the world, and I believe that recreating believable sonic environments will be pivotal in the long term success of virtual reality. I recently downloaded the Google Resonance SDK and had a play around with it in Unity, and it’s capable of some remarkably convincing results. I’ll be updating the blog with more detailed thoughts on that and many other things over the course of the year. I’ll also be using it as method of tracking my progress along the Dunning-Kruger curve, which should be a whole world of soul-destroyingly enlightening fun. Onwards!

My Discogs Page – Past Credits

Beyond Flesh and Blood OST

Inside The Loop: Audio Functionality in INSIDE →